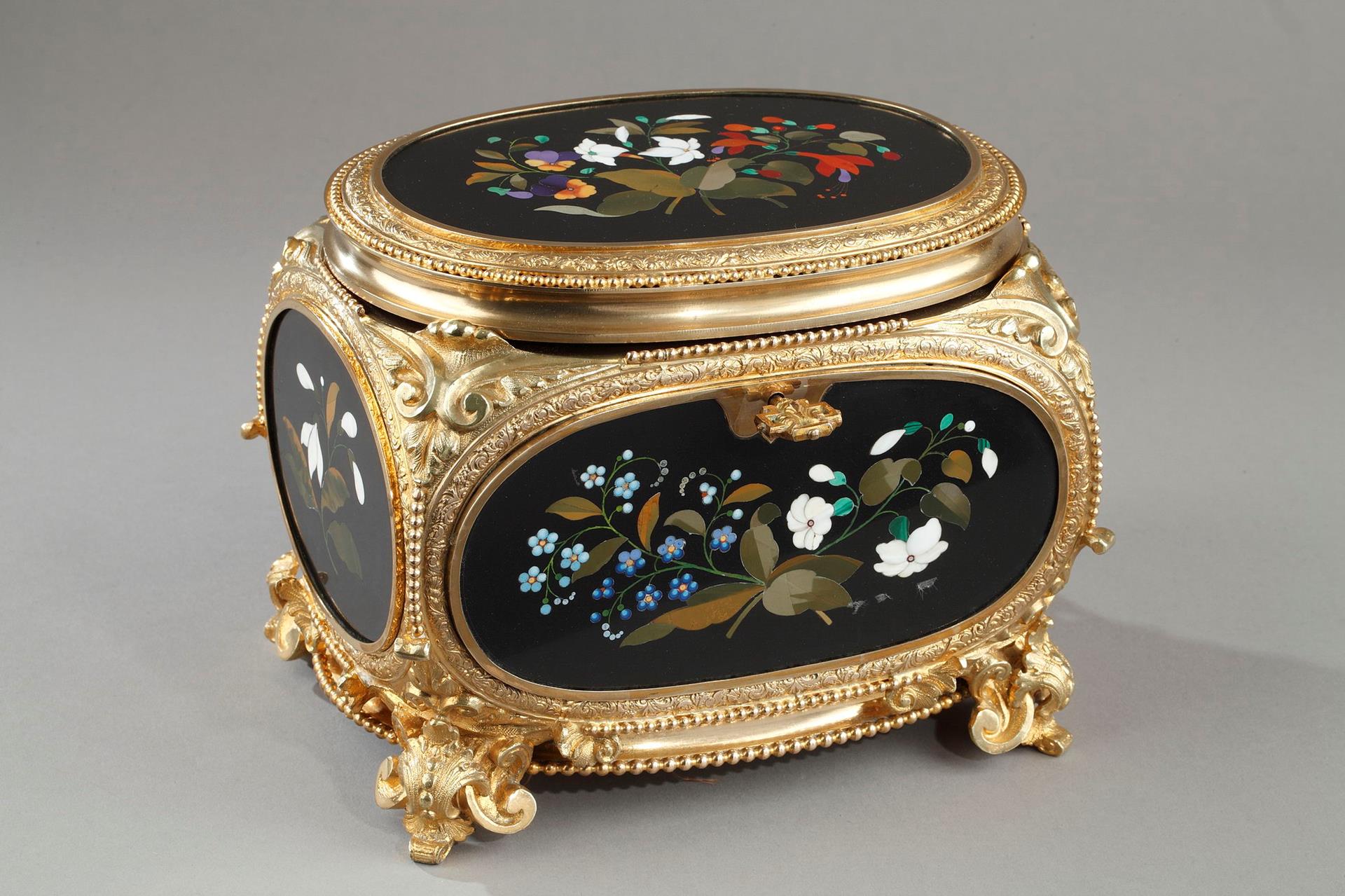 Exceptional rectangular box in pietra dura and black marble. The gilt bronze mounting is ornamented with garlands of pearls and rinceaux. The box is composed of 5 rectangular panels in pietra dura, featuring flowers on a black marble background. The flowers represented are: forget-me-nots, pansies, daisies, lily of the valley, morning glory, fuchsia, and roses.
The pietra dura technique used on this box was developed in Florence, Italy under the influence of the Grand Dukes of Tuscany during the 16th century. Semi-precious stones such as lapis lazuli, agate, and jasper were cut, then inlaid in black marble, and then polished. This technique has endured in the same was as mosaic has stood the test of time. Aristocrats, during their “Grand Tour” of Europe, would not miss the opportunity to bring back souvenirs like this one.
Signed: Tahan Fournisseur de l'empereur.
The origin of Tahan Company dates back to the early 19th century in Belgium, when Pierre Lambert Tahan founded a workshop producing various objects as toiletry wood case. r. In 1825, Pierre Lambert and his son, Jean Pierre Alexandre (1813-1892), were at the head of two factories, producing the same types of objects. In 1844, Pierre Lambert Tahan ceased his activities leaving the direction of his shop to his son who will completely revolutionize the company's organization by separating factory and store located at 32 Rue de la Paix. A year later, it was known as "Supplier of the King and Princes" and in 1855 he holded the title of "Supplier of the Emperor." The Court passed a large amount of commands for libraries and pedestal tables. Moreover, Pierre Alexandre Tahan participated at the World Fairs of his time. After the fall of the Second Empire, it was difficult to dissociate the Tahan House from the figure of the Emperor. In 1882, the company ceased its production and the store closed its doors.
D: 7.8 in. (20 cm) / 5.1 in. (13 cm) / H: 5.9 in. (15 cm)
Napoleon III
Price: 5900€
interior restaurated.