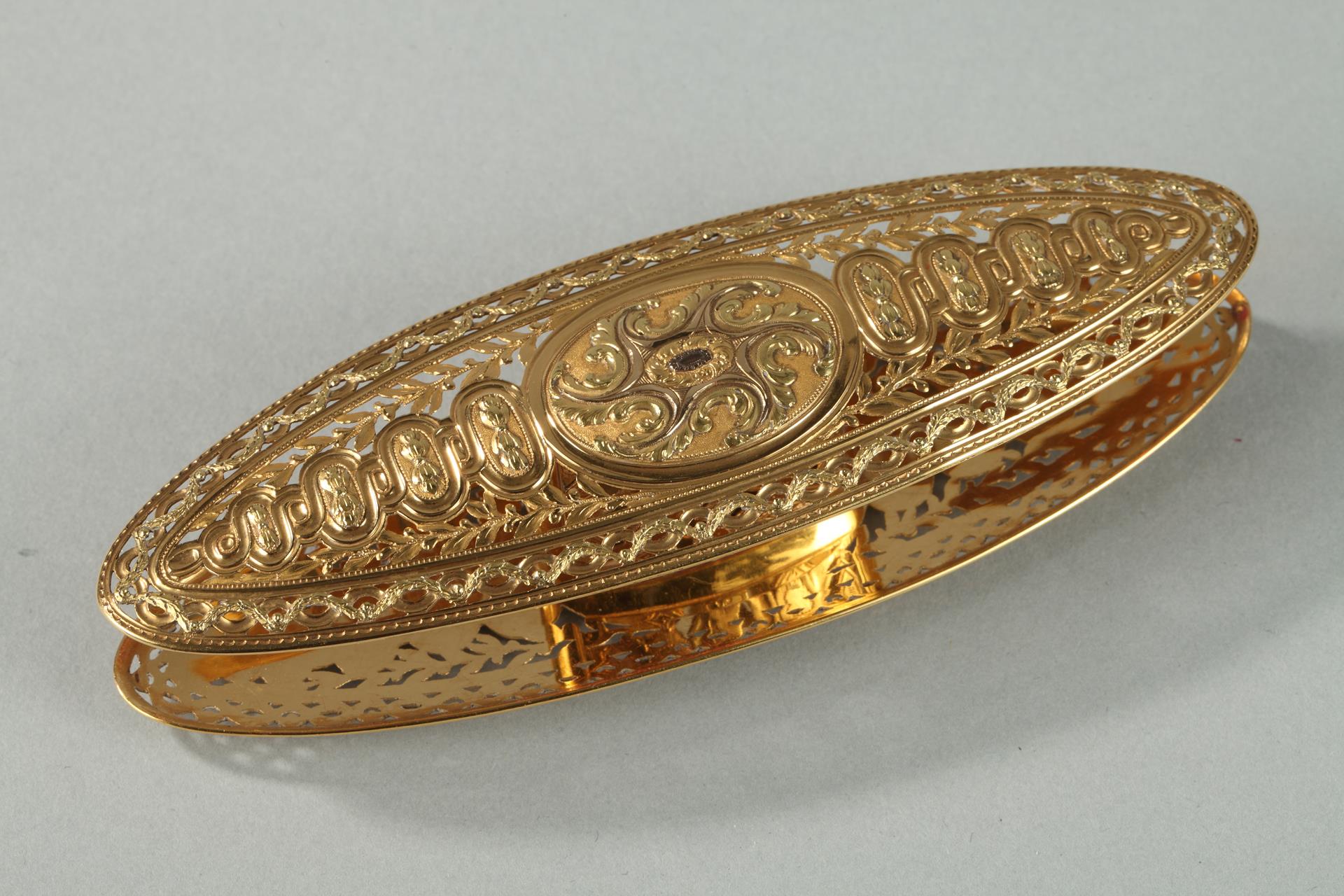 Large spool in colored gold. It is embellished with openwork laurel garlands and a row of gradated ovals running down the center with a stylized floral motif in the center of each oval. A large, central oval is decorated with white gold crown surrounded by an acanthus leaf motif in several shades of gold on a matte gold background. A garland of laurel leaves encircles the rim of the spool. Both sides of the spool feature the same decoration. The spool separates into two pieces allowing a thread to be anchored to the interior. The thread can then be wound around the central shaft. The intricately sculpted grill on the interior serves to hold the thread when work is stopped. This spool was used as a lace-making tool, allowing its user to create knotted lace and bands of trimmings for decorative objects such as pillows, as well as for clothing. A famous painting by Louis Tocqué titled Madame Dangé faisant des nœuds (1753, Louvre, Paris), shows the execution of this art. This spool has its original green leather storage case with a red velvet interior. It contains an appraisal from the Maison Boin Taburet, 3 rue Pasquier, Paris, signed by Henry Taburet (A few missing pieces on the case.) Weight: 2.3 oz (73 g)
Length: 5.2 in (13.2 cm)
Charge mark: Fleur de bassinet (1768-1775)
Guarantee mark: Crowned H for 1771
Release mark: Tête casquée (Helmeted head) (1768-1774)
Master goldsmith mark: Mathieu Coigny. Mathieu Coigny was the third generation of a family of goldsmiths, following his father and grandfather who both worked for the French king at Versailles. He earned Master Goldsmith status and was backed by his father on September 17, 1755, after which he settled at the Notre Dame bridge in Paris. It was there that he produced magnificent snuff boxes and other art objects for thirty years. He was elected as overseer of a metalworker’s association in 1771 and 1772. His decorative boxes are conserved at several prestigious museums such as the Louvre in Paris, the Wallace Collection in London, and the Metropolitan Museum in New York.
Work from the Louis XV period.
REF : 7497
Price: 17000€