A 19th Century Gold and Silver, Diamonds and Gemstones cigarette of the Duc de Morny. Signed Wiese. Enquire about this Item 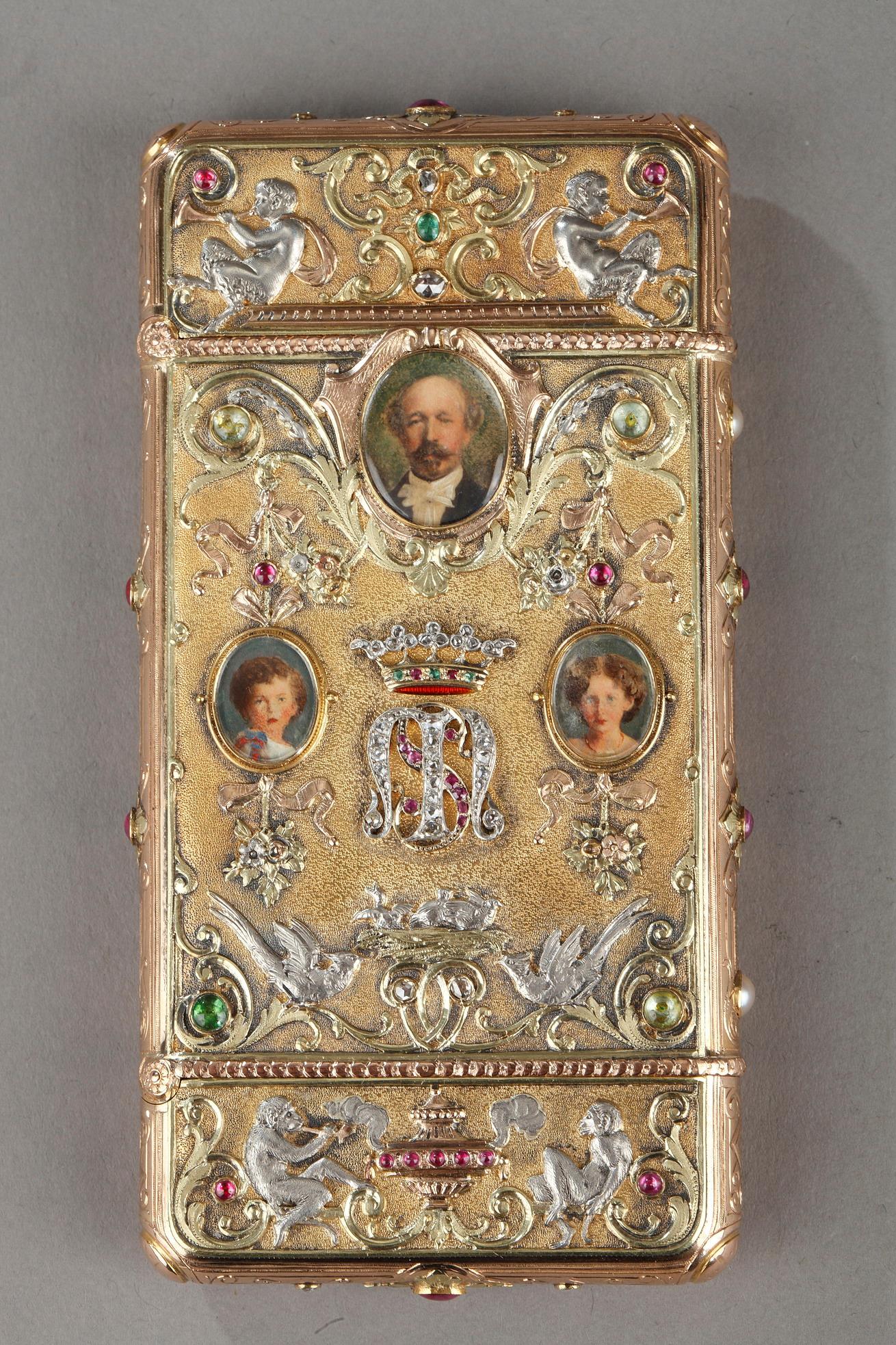 Exceptional cigarette case in gold and silver. The case opens on two compartments: the top compartment for cigarettes and the bottom compartment including a match scraper and a mattress holder. The whole case offers a silver decor set with diamonds and gemstones set against an amati gold background.The upper part is adorned on one of the faces of fauns suffering in a horn and the other putti playing musical instruments. The body is decorated on one side with an enamel heraldic decoration; coat of arms with three martlets of sand, with the border composed of Dauphine and eagle. The coat of arms is surmounted by a ducal crown set with rose cut diamonds. Around the coat of arms is arranged a symmetrical decoration of floral garland, scrolls set with fine stones and a caramel with a lily on amati gold background. On the other side, on both sides of the monogram M-S; Morny-Sophie, a porter raised in bust of Duc de Morny as well as two of his children: Auguste and Charlotte. The portraits are framed by floral garlands and a pattern of doves near a nest. The lower part of the case is adorned with monkeys smoking on either side of a scent burner and on the other side, doves near a basket flowers.
Jules Wièse was trained in Berlin by the goldsmith of the court, JG Hossauer. In 1839, he came to Paris to work for François Désiré Froment-Meurice, one of the most eminent jewelers and goldsmiths of the nineteenth century. In 1844 he had settled alone, although he continued to work for Froment-Meurice. The exhibition of 1855 is the first to which he exposes himself. He won a medal of honor at the London World's Fair in 1862. He bequeathed his studio to his son Louis Wièse in 1880.
The case is signed WIESE PARIS.
Charles Auguste Louis Joseph Demorny, said Count de Morny, became Duke of Morny (1811-1865) son of Horthense de Beauharnais and Charles de Flahaut, half-brother of Napoleon III. He married Princess Sophie Trubetskoy.
H: 3.9 in. (10 cm) / L: 2 in. (5.3 cm) / l: 0.5 in. (1.3 cm).
Weight: 3.42 oz (97 g).
Gold hallmarks Second Empire period.
Price:on request.
REF:6097
Bibliography:
Hellmuth, S. (January 01, 2014). Jules Wièse, heir to François-Désiré Froment-Meurice: In the footsteps of a goldsmith and his singular work. Review Of Art.