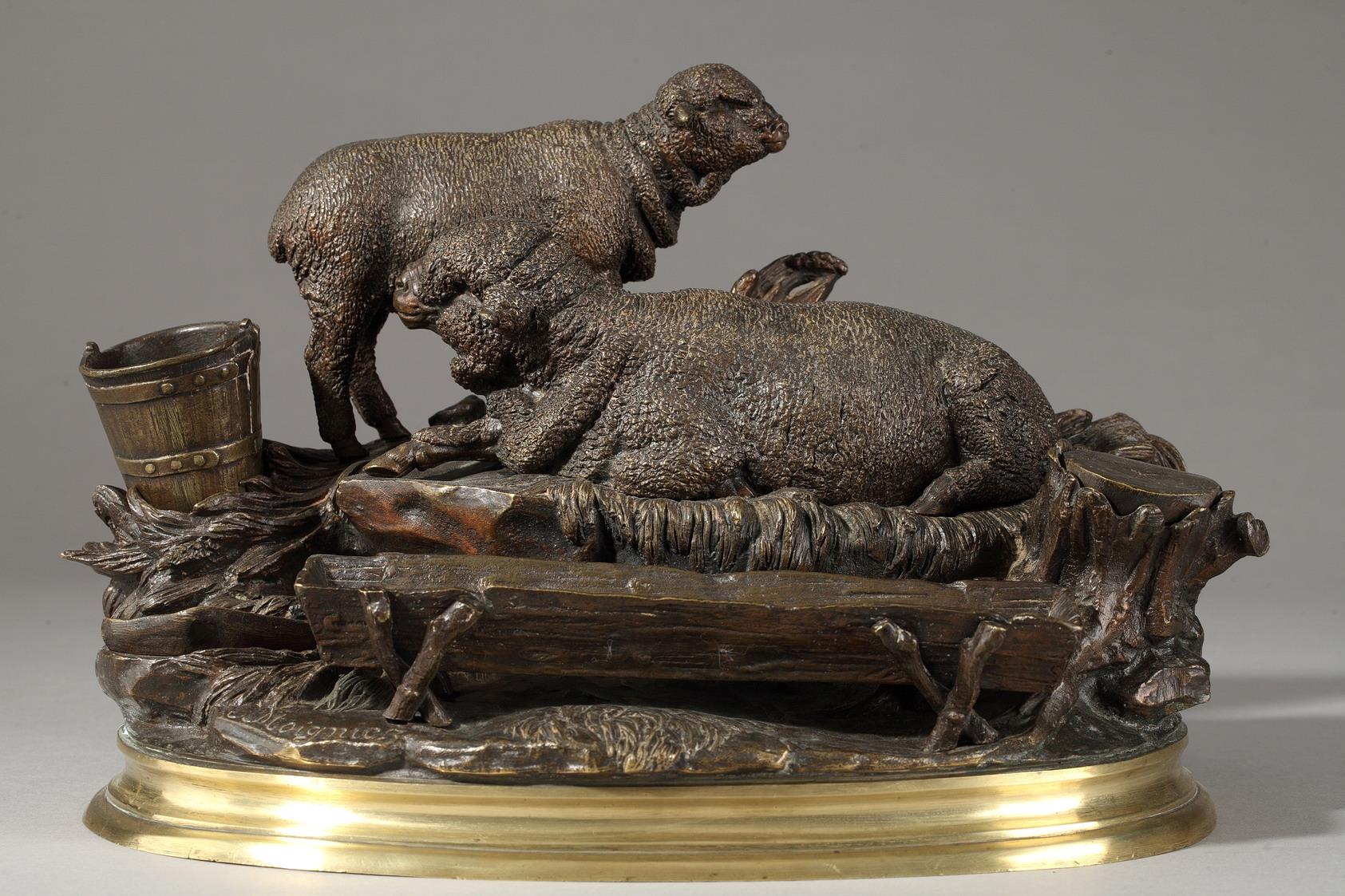 A patinated bronze inkwell with a gilt base representing two grazing sheep.  Antique edition signed in hollow on the terrace: "J. Moigniez". The inkwell has two cups, one of which can be retracted into a bucket and the other into the tree stump. The penholder is a drinking trough. Jules Moigniez renders the details of the fur with precision and meticulous chiselling.
This inkwell is characteristic of the naturalist movement that was sweeping through the arts around 1880: "Nature is represented as it is" R. Dusmenil.
L: 12.2 in (31 cm) ; H: 8.3 in (21 cm) , W: 6.3 in (16cm).
Period: end of the 19th century circa 1870-1880.
Sculptor Jules Moigniez.
Price: 3200€.
REF:4568

Jules Moigniez (French, 1835-1894) was a student of Paul Comolera and his attraction to animal sculpture comes from his studies with his teacher. His most plentiful subjects were game birds but he also sculpted dogs, sheeps, horses and equestrian groups. Moigniez's first recorded exhibit was at the Exposition Universelle of 1855, where he exhibited a plaster titled "Pointer stopping at a Pheasant". He exhibited regularly at the annual Salons from 1859 until 1892. He also exhibited in England at the London International Exhibition of 1862 where he found a very receptive audience. Moigniez was a successful sculptor in France as well as in England and America where the majority of his sculptures were sold. Most of Moigniez's bronzes were cast by his father, who was a metal glider. Their foundry was established in 1857 for the propose of producing Moigniez's bronzes. Many of Moigniez's bronzes were gilded, silver-plated or had different and unusual patinas applied to them as the Moigniezs' were constantly experimenting with new finishes for their market. Moigniez's father kept casting his son's works after his death and upon his fathers death the foundry as well as all of the plasters and models were sold to Auguste Gouge, who continued to produce Moigniez's sculpture until after the First World War.