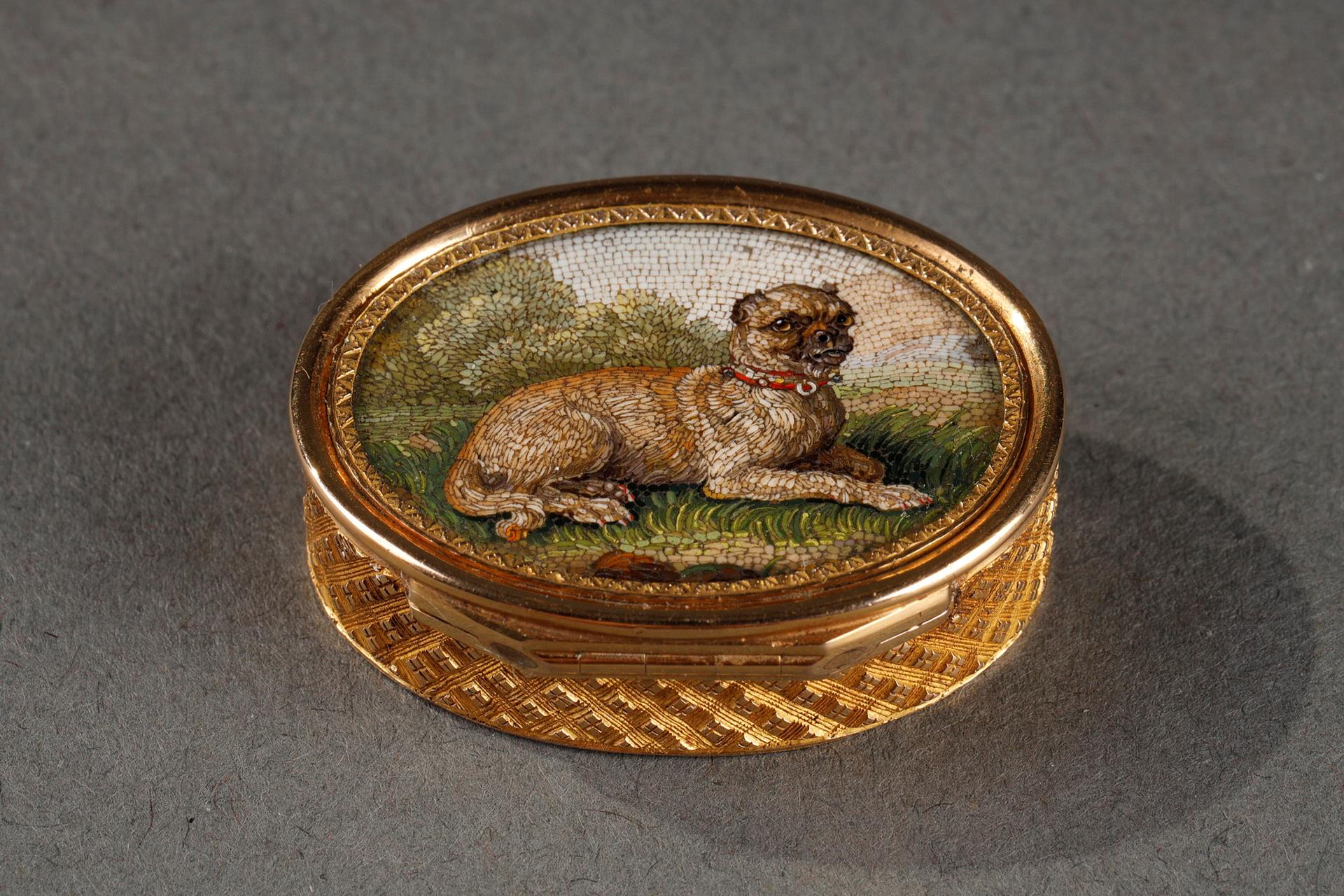 A gold vinaigrette, oval shape, with a frame and reverse side entirely guilloched with geometrical motifs. The vinaigrette opens onto a grid with foliage motifs. The hinged lid is decorated with a micromosaic depicting a pug lying in a landscape. The pug is wearing a collar with bells. The tesserae are carefully arranged: the background is suggested by quadrangular tesserae arranged side by side, while the branches and grass are represented with pointed or comma-shaped tesserae. The dog's coat is beautifully treated with plays of light and shadow to highlight the coloured claws of the pug or the reflection of light in the eyes. This technique, known as "malmischiato", where several colours are used for one glass filament, is mastered by a few master workshops, including that of Antonio Aguatti.
The dog theme is a very popular subject, however, the pug is very rarely represented. These micromosaic plaques were very often brought back by European travellers on the Grand Tour visiting Rome in the early 19th century. Aguatti's workshop became famous for its compositions featuring dogs.
Antonio Aguatti came from  a dynasty of very famous mosaicists. His studio was located at 96 Piazza di Spagna in Rome. His workshop has distinguished itself in the quality of its tesserae using numerous geometrical shapes and in the treatment of their colour using nuances close to pictorial art.
Weight:0.82oz (23.5 g).
L: 1.18in. (3 cm); W: 0.86in. (2,2 cm), H: 0.39in. (1 cm)
Gold marks:
Small gold guarantee: Coq (department) 1798-1809
Bear head: revolutionary hallmark.
Master goldsmith: GRM Morel Gabriel Raoul working insculpté year V (1796) 22 messidor then towards 1812 5 place Thionville then 3 street cock saint honoré
Early 19th century.
Prix:14200€
REF:8238
Bibliography:
Micromosaics: Gilbert collection. Jeanette Hanisee Gabriel. 2002