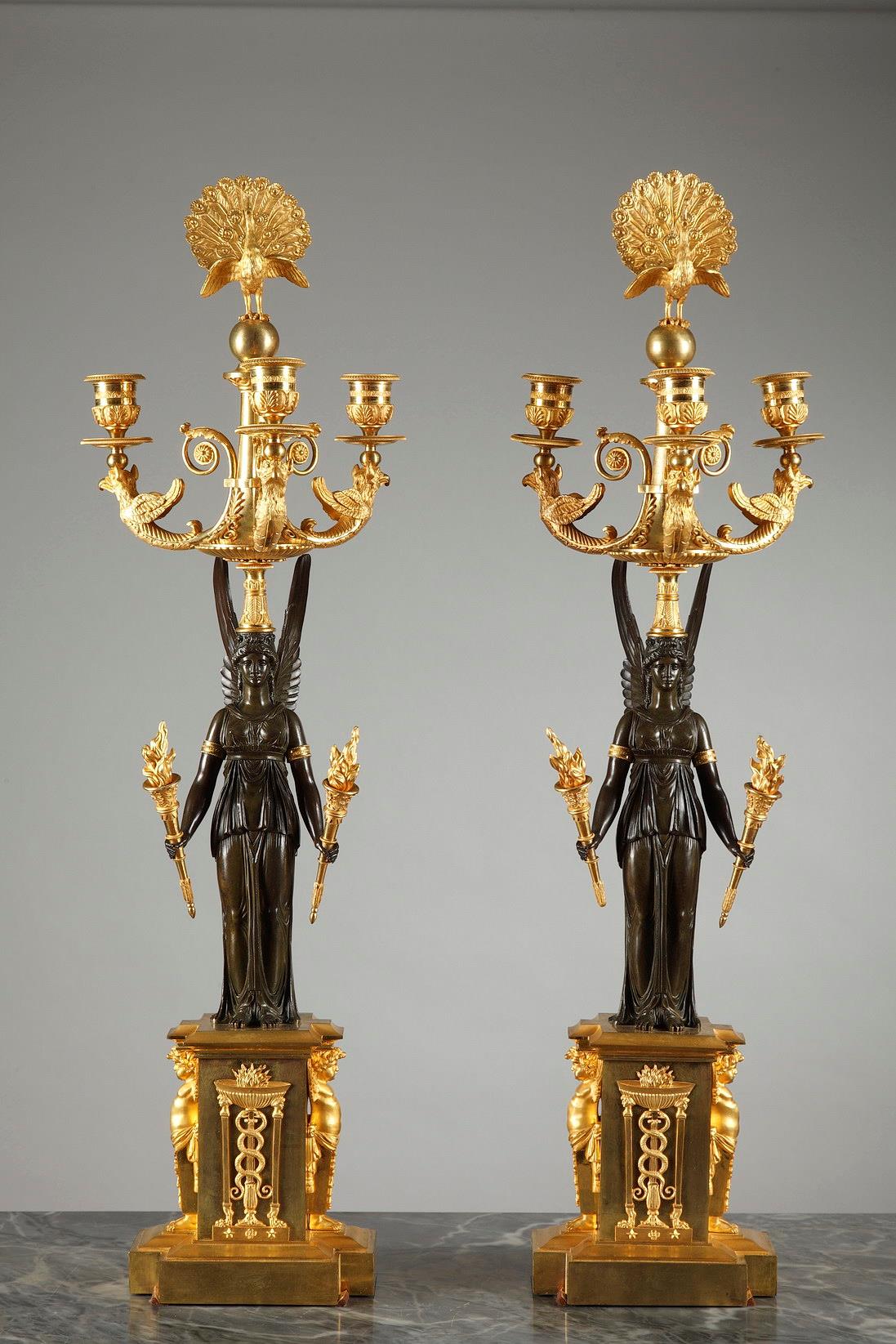 An important pair of gilt and chiselled bronze three-light candelabra decorated with griffons and rosette, the patinated bronze stem adorned with winged Victory holding ormolu torches. The set is topped by a peacock on a globe, solar symbol and sign of immortality. Cruciform base decorated with caduceus, two interlaced snakes and winged putti. Attribute of Mercury or Hermes in Antiquity, the caduceus is the symbol of peace, eloquence and trade. Empire period. Perfect condition.

Our model is inspired by the projects of Charles Percier and François-Léonard Fontaine, famous architects of the Emperor. Their most important work entitled "Recueil de décorations intérieures", was published in France at the end of 18th century. It created a style which dominated the European decorative arts during the first half of the 19th century. Winged Victories, caduceus and griffons are some elements which reveal the assimilation of their ornamental vocabulary by the bronze founders of their time.
Several pairs of similar candelabra are known today : a pair of three-light candelabra that belonged to Pauline Borghese, is at the British Embassy in Paris. It was bought in 1815 by the duke of Wellington ; a second pair, in the castle of Hombourg collection, is reproduced in Léon de Groeber book, "Decorative Arts in Europe, 1790-1850", page 171. Finally, three other pairs are in the Royal Palace of Aranjuez, the castle of Nymphenburg and Palace of Quirinal. The bronze founder who kept the original model is unknown, nevertheless our candelabra are very close to Pierre-Philippe Thomire (175-1843 ) and Claude Galle (1759-1815) works. These two remarquable bronze founders worked for the most important dignitaries at their time.
Circa: 1800
Dim: 76 x 21 x -18 cm (29 ⁷/₈ x 8 ¹/₄ x -7 ¹/₈ inches)
Price: 55000 euros
Ref: 4513